What is CPU Priority?

For example, you have a compute resource with 3GHz CPU cores. Then:

So you can either create one VS with 100% CPU priority on that compute resource, or 5 VSs with 20% CPU priority (or any other combinations with the total of 100%).

How does CPU Priority work?

Imagine a compute resource like a grocery store with only two checkouts ( CPU cores). In the afternoon, there are not so many customers (virtual servers) so when someone needs to go to checkout, there is always one available. Later in the night, a queue starts to form and customers have to wait, but some of them push to the front of the queue (100 % priority) whilst all other (1% priority) have to wait patiently for the line ahead to clear.

Can I oversell resources?

Depending on the settings of your cloud, OnApp may allow overselling of cloud resources. For example, OnApp will allow you to create 5 virtual servers with 100% CPU priority/1 CPU core on a compute resource with a 4-core CPU. In this example, OnApp would reduce the guaranteed CPU for each virtual server.

To oversell CPU, make sure that CPU Guarantee is not enabled. To disable this, navigate to Settings > Configuration > Compute Resource Zones > click Edit Zone and uncheck the CPU Guarantee box.

If resource overselling is disabled for your cloud, OnApp will not create virtual servers requiring more CPU resource than is available on the compute resource.

What is CPU Guarantee?

Does CPU Priority depend on a virtualization type?

Yes, the CPU priority you can set to virtual server depends on the virtualization type of the compute resource the server is located on:

How is CPU utilization calculated?

The virtual server CPU utilization is calculated in the following way:

The chart show the total CPU usage for all the cores of this particular VS for a specified time period.The vertical axis shows the CPU usage percentage (CPU percentage is the core-independent quantity). The horizontal axis defines a time period. 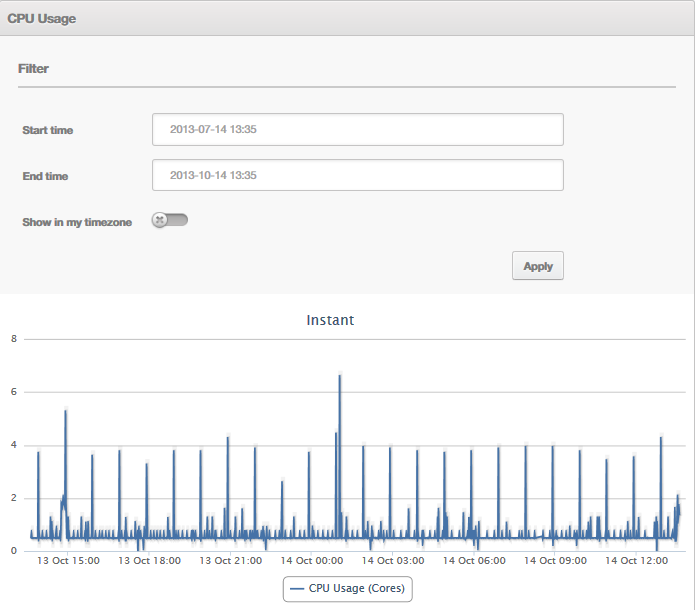 What are CPU Units?

Each compute resource core within a zone is given a 1000 CPU Units default value when CPU units are enabled per zone.

You can change the password on the user profile page. You can access it in two ways:

On the following page, perform these steps:

How is memory calculated for compute resources?

Each compute resource has a reserved memory overhead value. This value is pre-configured by default in info_hub.yml.

Once the account is paid, it should be unsuspended immediately. It may take up to 15 minutes before you can access the CP again.
Please note that this happens after setting up a payment with the Finance team, and therefore, the Support team will not be able to help you if it is out of office hours for the Finance team.

Since I use the loadbalancer.org software on my OnApp cloud, can I also install the software elsewhere on my network without any charges?

No, if you require additional usage of the loadbalancer.org software, you should purchase the required license directly from http://loadbalancer.org.

Is Citrix XenServer supported by OnApp?

We don't support Citrix XenServer compute resources. However, you can manually import existing XenServer virtual servers to the OnApp cloud.

How can I get hardware advice on expanding my cloud?

Email our Cloud Architecture Specialists at architectureteam@onapp.com and they will help you make the right decision.

Is it possible to change the VNC console resolution?

No, it is not possible to change the resolution.

As a workaround, use the zoom in and zoom out features. Press the following key combinations when accessing the console through the browser: